Students explored the National Museum of Anthropology. It's the largest and most visited museum in Mexico. It contains significant archaeological and anthropological artifacts from Mexico's pre-Columbian heritage, such as the Stone of the Sun and the Aztec Xochipilli statue. 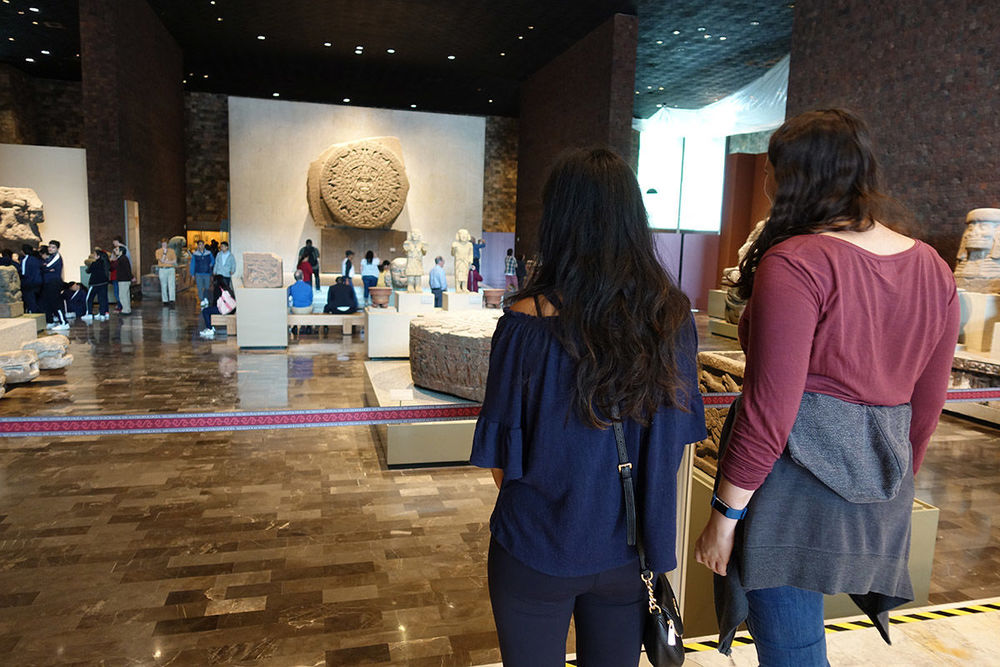 Students visited the Aztec calendar stone, known as Stone of the Sun 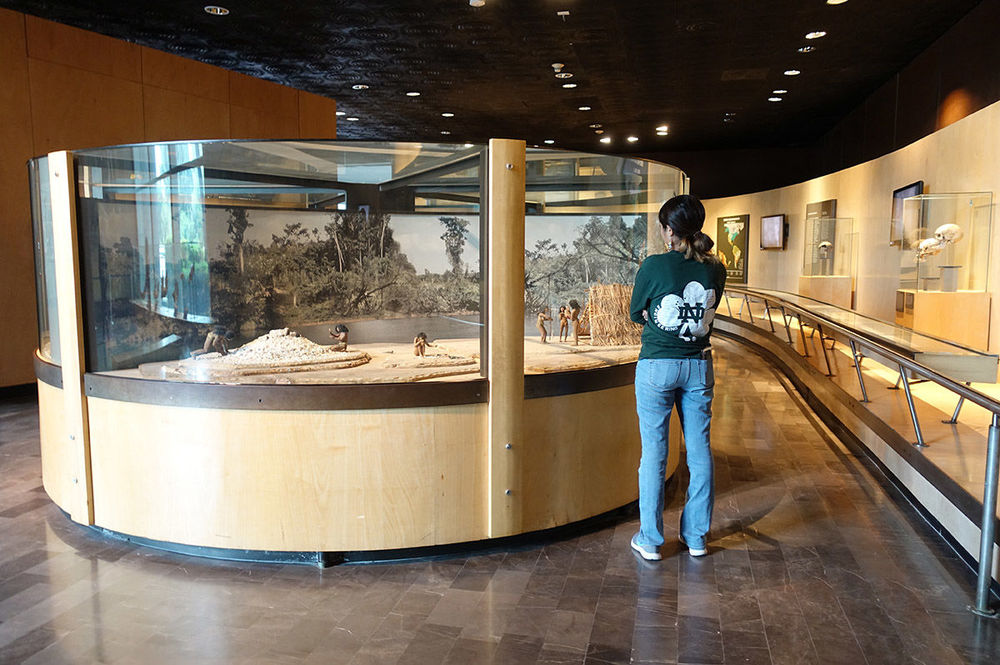 Students checked out the exhibitions on the ground floor, which covered all pre-Columbian civilizations located on the current territory of Mexico

Students walked up a long and windy path to see the Chapultepec Castle, o r Castillo de Chapultepec. The castle is located at the top of Chapultepec Hill. It's located in the middle of Chapultepec Park in Mexico City at 7,628 feet above sea level. The site of the hill was a sacred place for Aztecs, including that of Military Academy, Imperial residence, Presidential homes, and presently, the National Museum of History. 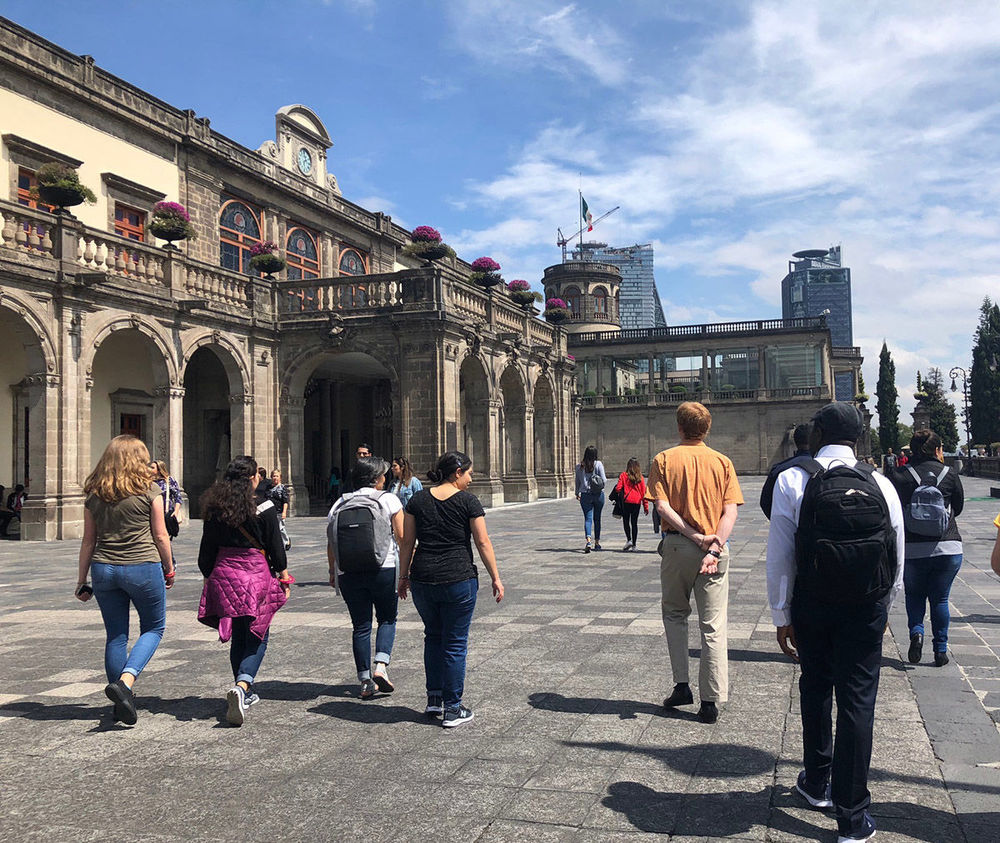 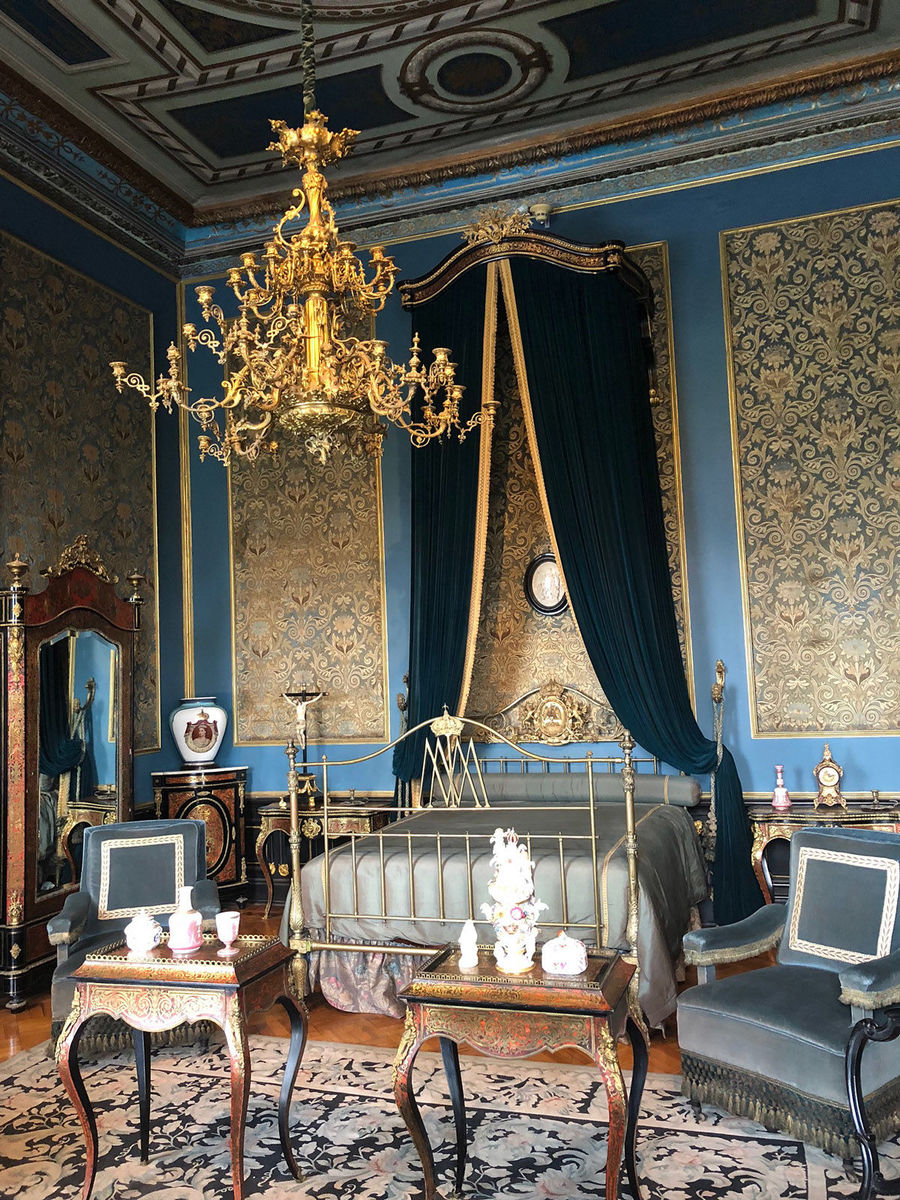 Students could view the rooms inside the castle still intact, this room belonged to Empress Carlota

Today, we caught up with Father Ken Amadi from Nigeria. He's a graduate student at Notre Dame and talks about why it was important for him to take the pilgrimage to Mexico City.

Students arrived in Coyoacan and celebrated mass at Parroquia de San Juan Bautista. This church is considered a national monument and is one of the three oldest temples in Mexico City. The construction of this church began in 1527 under the Franciscans and Dominicans. It was completed in 1550. Karen Schneider-Kirner, Campy Ministry's choral program director and organist, led a group of students to sing during mass. They were able to practice on the way to Coyoacan.

Coyoacan refers to one of the 16 boroughs of the Federal District of Mexico City. This area is filled with narrow cobblestone streets and small plazas, which were laid out during the colonial period. Students took a historical train ride through the city to learn more about the history of the structures. Of course, students made a pit stop to try out the much anticipated churros. 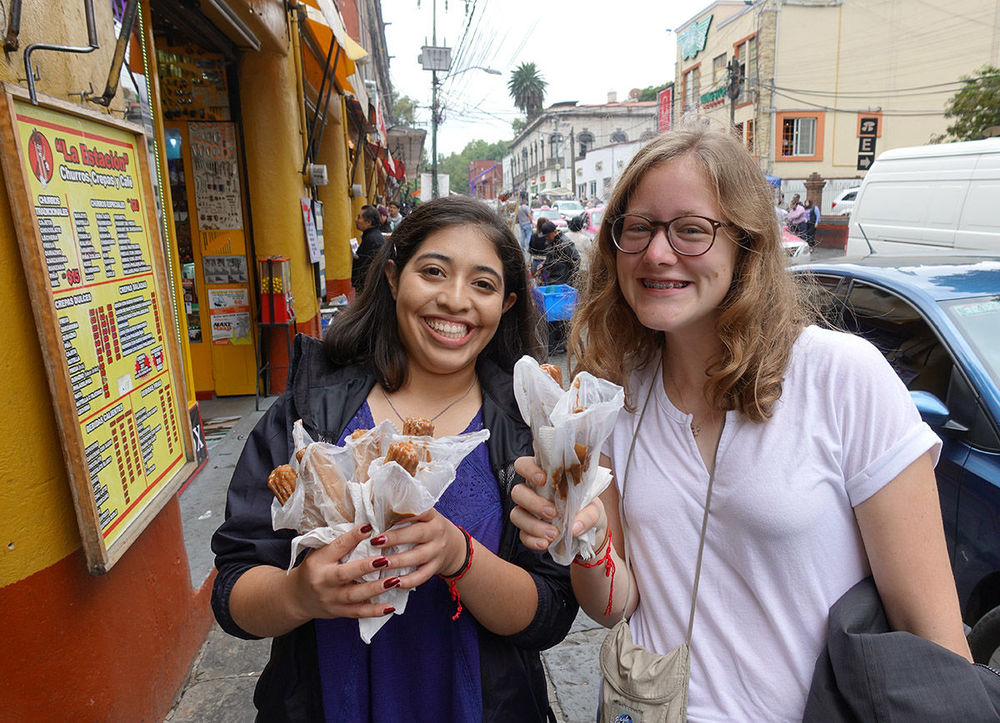 Next, students headed to the largest artisan market in Mexico City. The Ciudadela Market is known for its colorful handcrafts and folk art. Located in the historic center of Mexico City, the market is the first of its kind in the country. It's now home to more than 350 vendors selling to Mexican and foreign tourists. 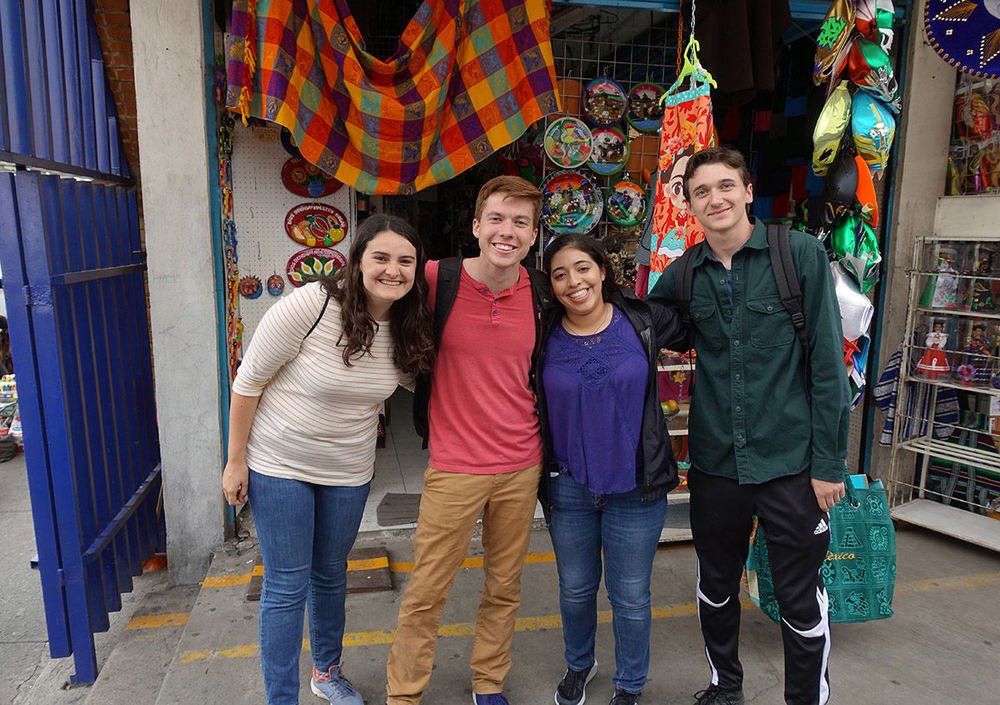 Today, we met up with graduate student Alejandra Herrera. She talks about growing up as a Mexican American and why she is excited to explore more of her Mexican heritage.

Students walked to the Latin America Tower, or Torre Latinoamericana, where they took in the breathtaking views of Mexico City. The skyscraper is 44 stories tall and one of the most important landmarks in Mexico City. 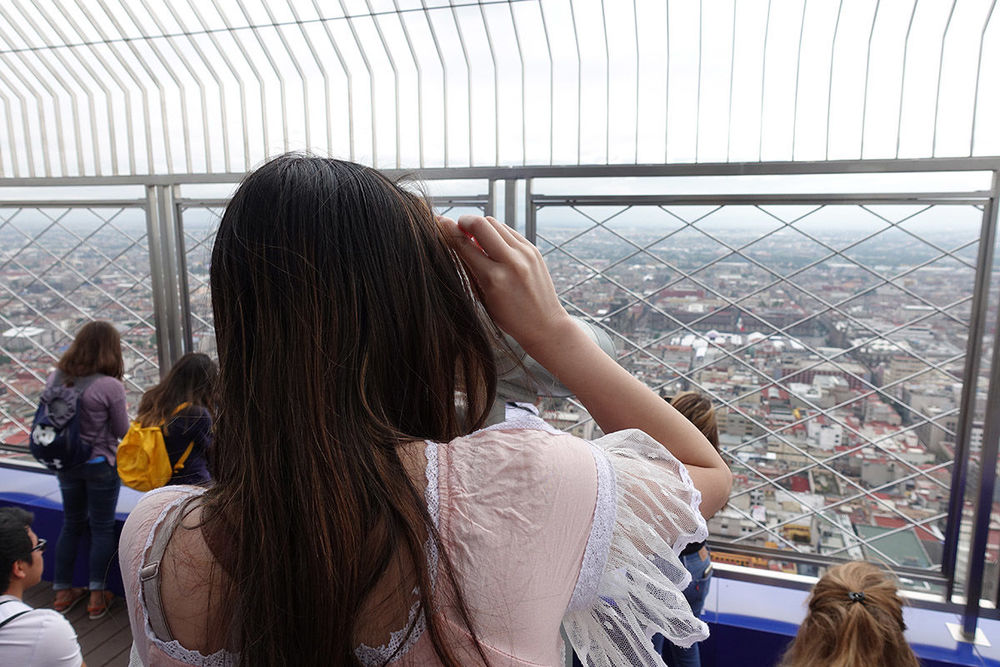 It's also widely recognized internationally as an engineering and architectural landmark since it's the world's first major skyscraper successfully built on highly active seismic land. Students walked through the history of the skyscraper and learned more about how the old skyscraper withstood the 1985 Mexico City earthquake. 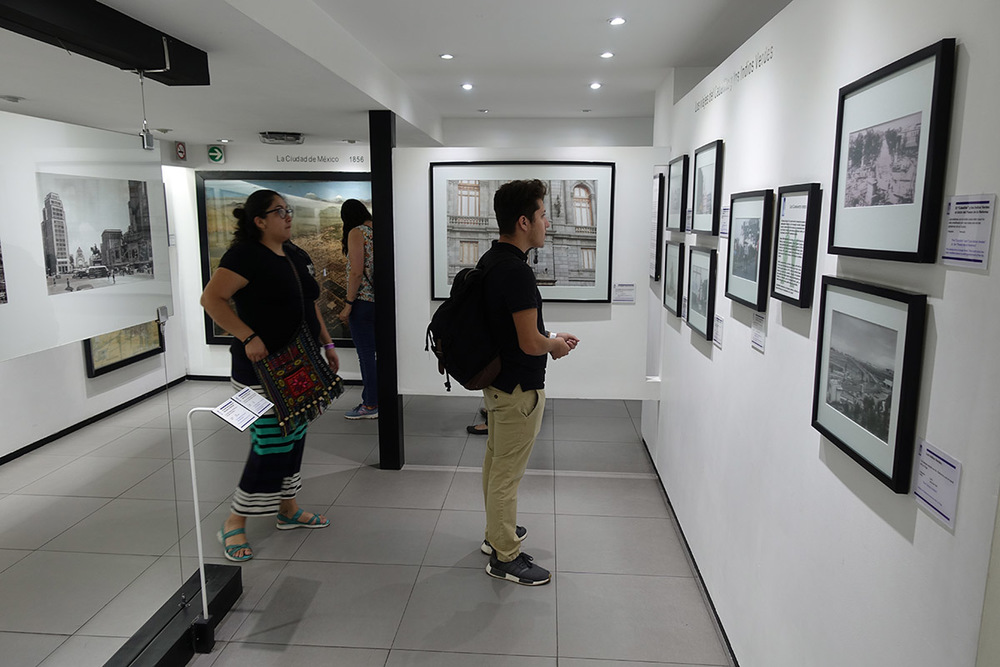 The Cathedral in Mexico City was within walking distance from the skyscraper. On the way to mass, students stopped by one of the oldest church buildings in the America's called the Church of San Francisco. Built in 1524, the church was built on the site where Moctezuma II's zoo once stood. Students toured the church and took some time to reflect and pray before heading to mass at the Cathedral. 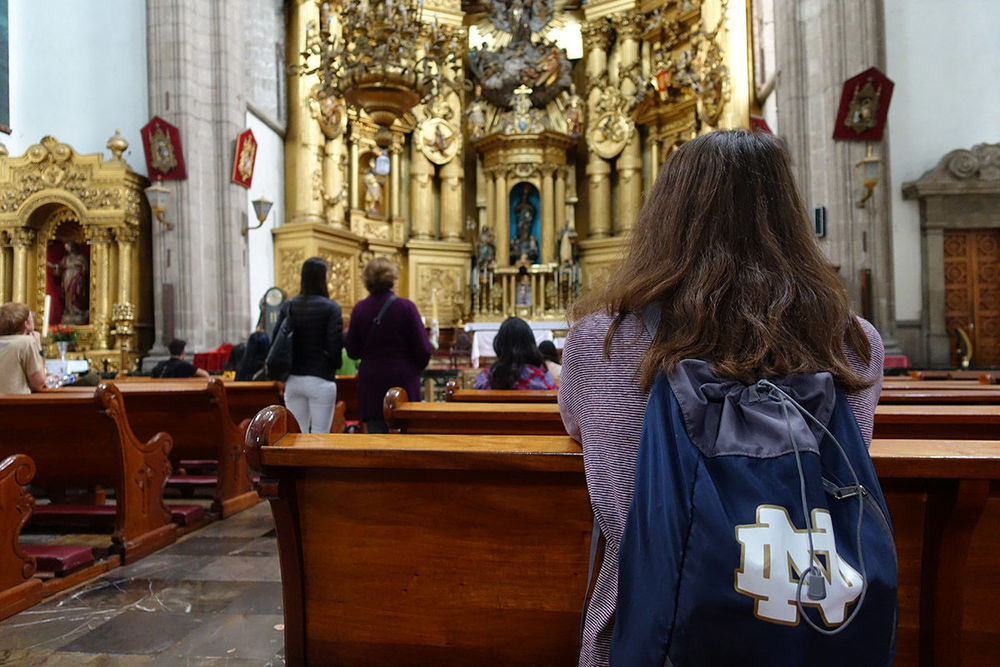 Inside the Church of San Francisco

Students walked over to one of most symbolic churches in the world and celebrated mass together. The Metropolitan Cathedral of the Assumption of the Most Blessed Virgin Mary into Heaven is the largest cathedral in the Americas. It's situated atop the former Aztec sacred precinct near the Templo Mayor on the northern side of the Plaza de la Constitucion in downtown Mexico City. 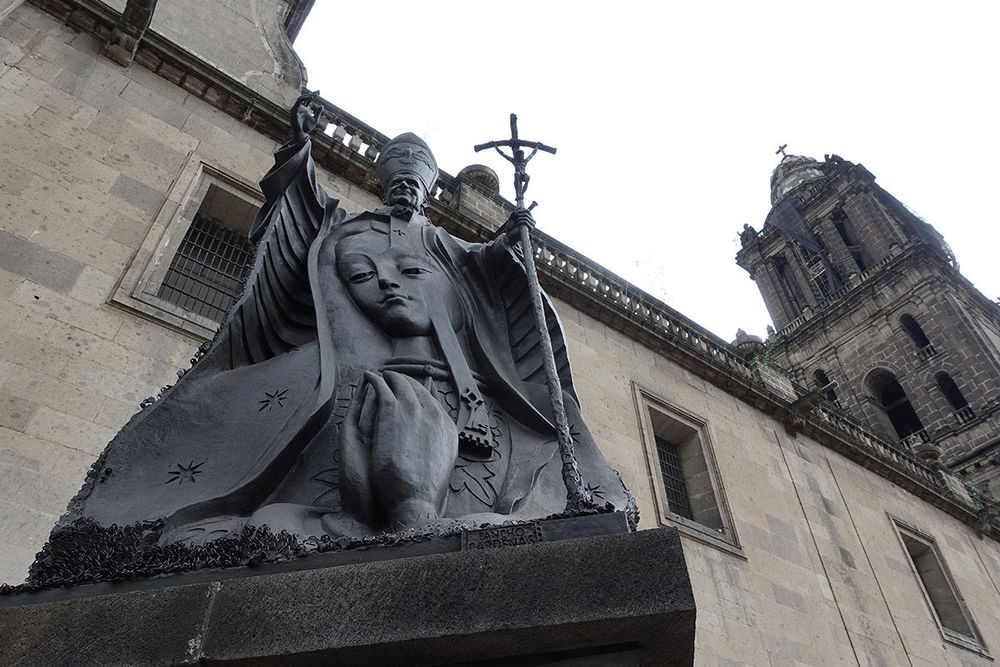 The Cathedral was built in sections from 1573 to 1813 around the original church that was constructed soon after the Spanish conquest of Tenochtitlan, eventually replacing it entirely. The internal offerings are magnificent, with several works of art and religious relics. Students were amazed by the gold that coats every surface and towering ceilings. 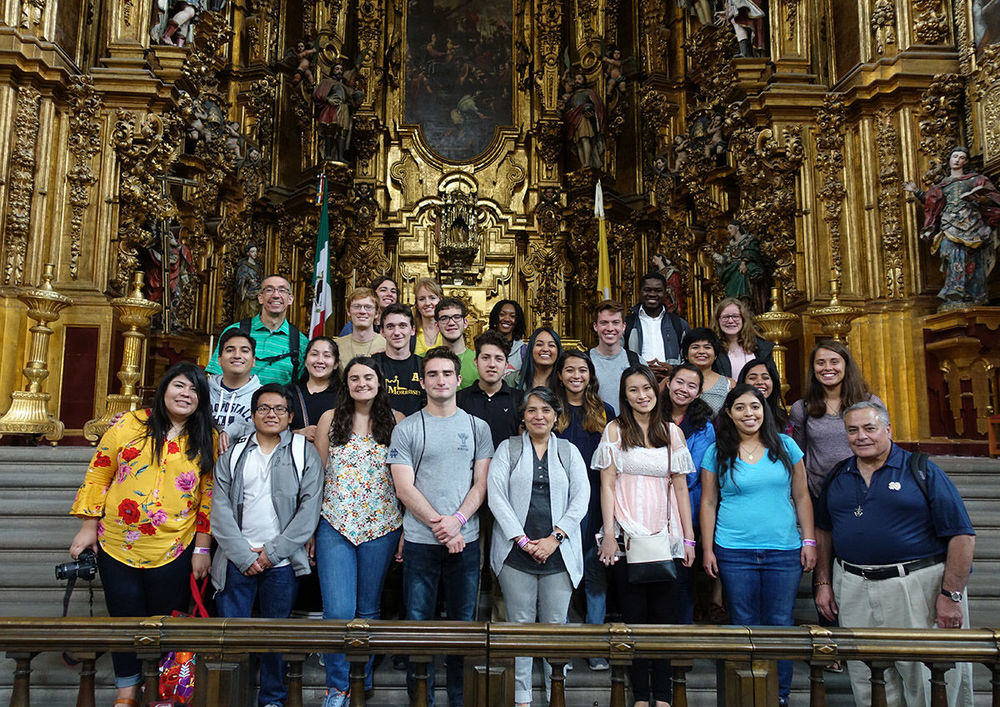 Today, we learned more about senior Megan Wilson and why she chose to spend her fall break in Mexico.

Students arrived at the Pyramids of Teotihuacan, an ancient Mesoamerican city located in a sub-valley of the Valley of Mexico. The site is one of the most architecturally significant Mesoamerican pyramids built in the pre-Columbian Americas.

Apart from the pyramids, Teothiuacan is also anthropologically significant for its complex, multi-family residential compounds. Students were able to tour parts of the compound and visit several murals that have been exceptionally well-preserved. 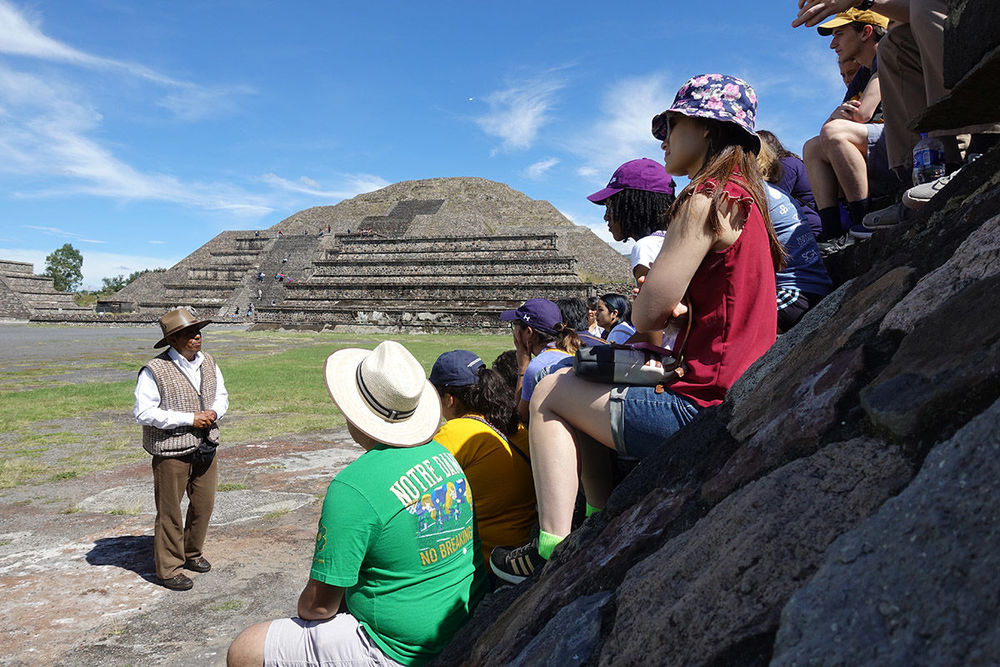 At the end of the tour, students climbed the largest pyramid in Teotihuacan called the Pyramid of the Sun. They were able to make it up the 248 uneven stair steps to the top of the structure.

Students attended mass at La Votiva, a small historic church in Mexico City. Following mass, students were treated to dinner, dance, and music at La Macarena Taqueria. The restaurant hosts the group every year, as the owner is close friends with Father Joe Corpora. Check out some of the sights and sounds from their night out.

Perhaps one of the most emotional experiences during this pilgrimage, students were able to visit the image of Our Lady of Guadalupe. The new Basilica houses the original cloak of Juan Diego. It's one of the most important pilgrimage sites of Catholicism and is visited by millions of people every year. 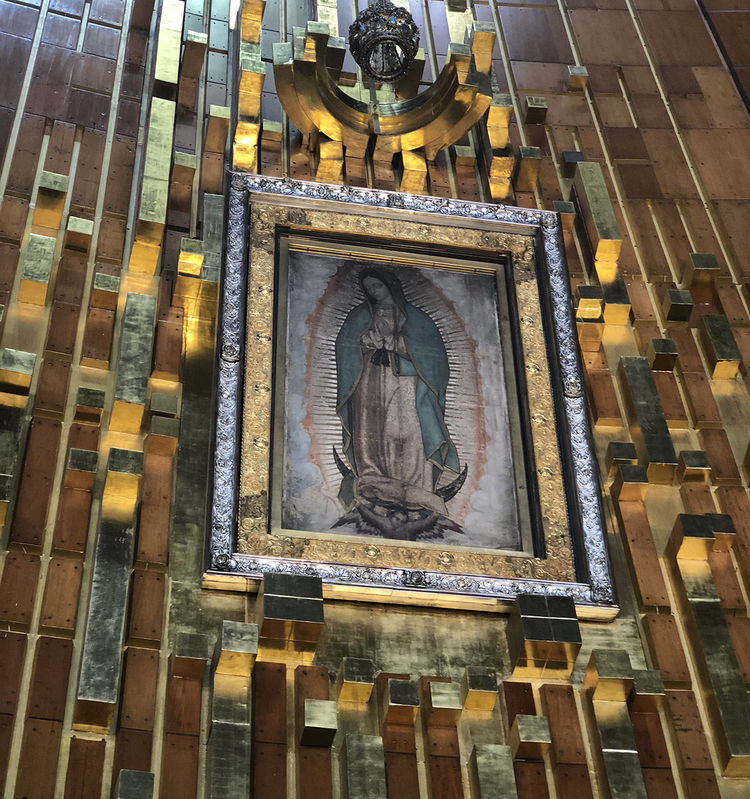 The original tilma, which holds the image of Our Lady of Guadalupe 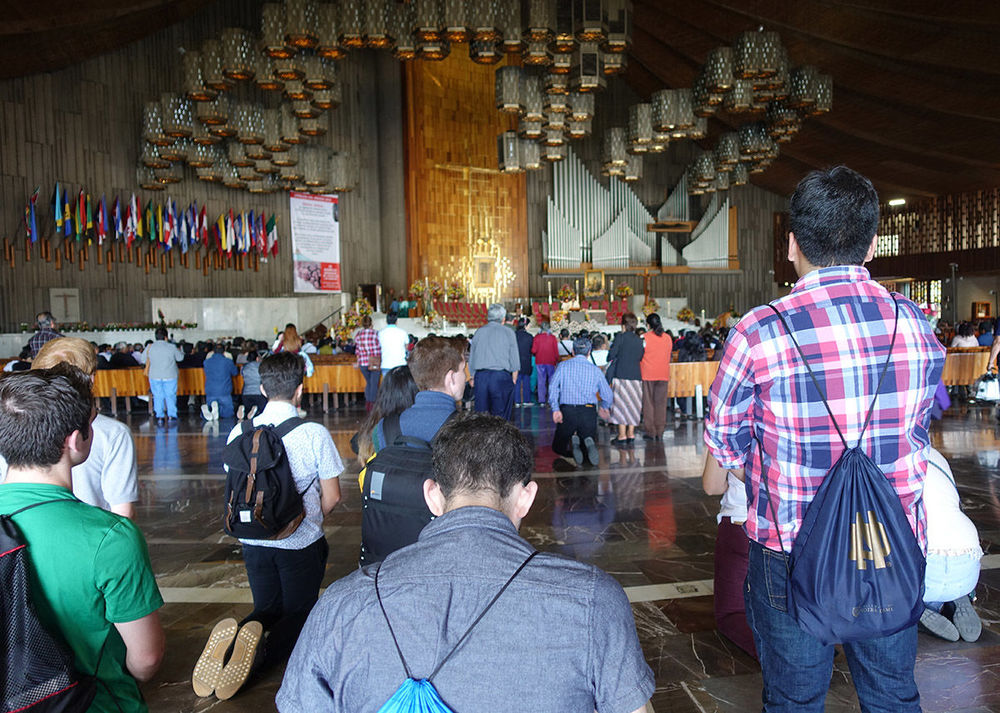 Inside the new Basilica

Following mass, students were able to explore the Basilica and pray in other chapels on the grounds. The site is also known as La Villa de Guadalupe, or La Villa, as it has several churches and related buildings. 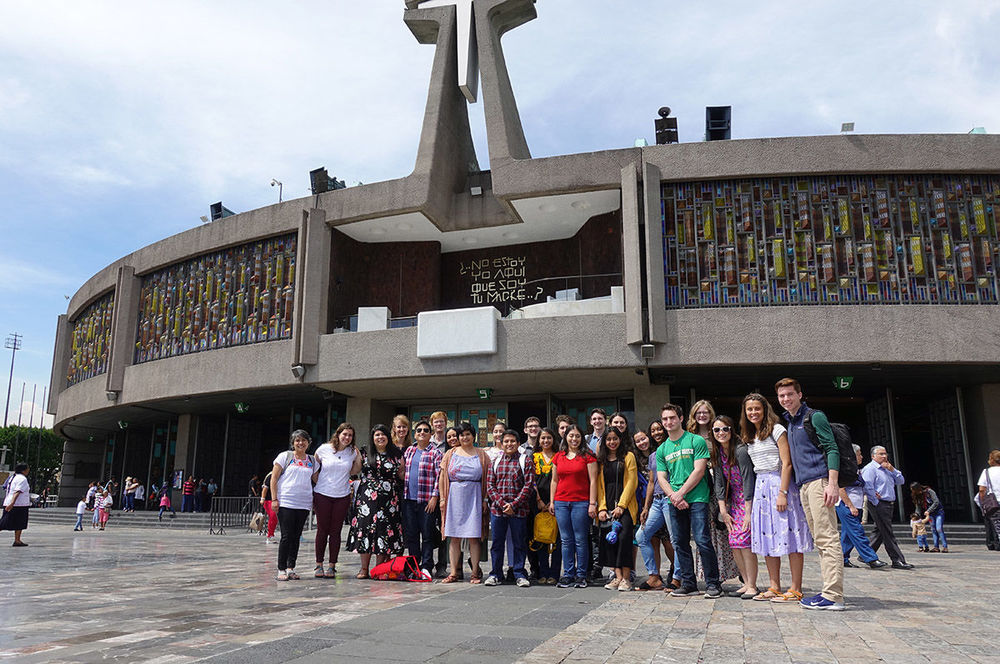 After dinner at Nestor's Taqueria, students ended the day with reflection.

All twenty-one students come from different backgrounds and have different motivations for the pilgrimage. Today, we learned more about junior Joe Drey and why he chose to spend his fall break in Mexico.

Twenty-one students arrived late Saturday night to participate in the Mexico City Pilgrimage. Sunday morning, they were encouraged to get to know the city and explore Reforma Avenue before embarking on the cultural and spiritual journey. 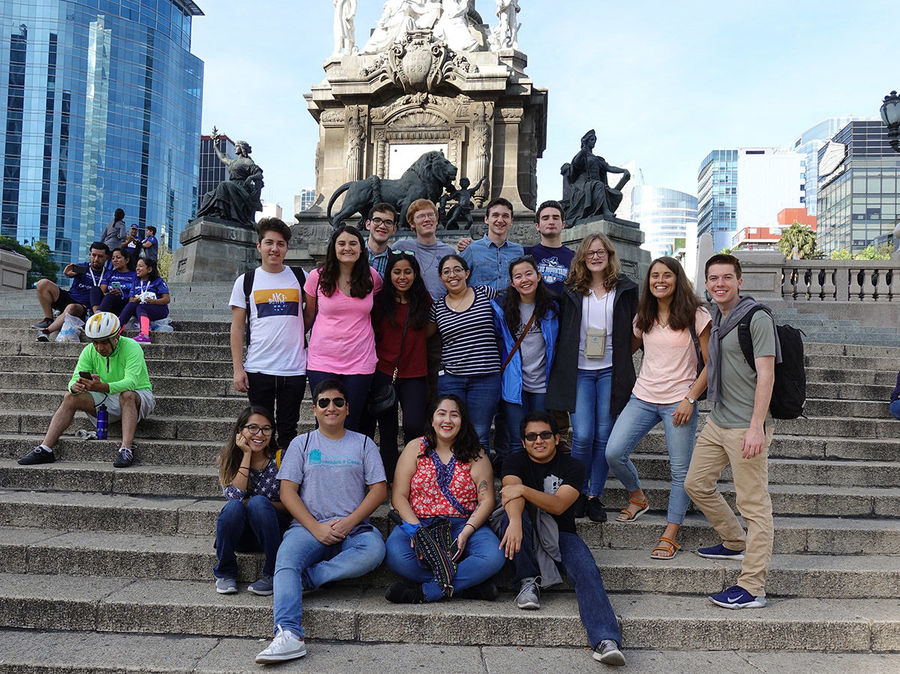 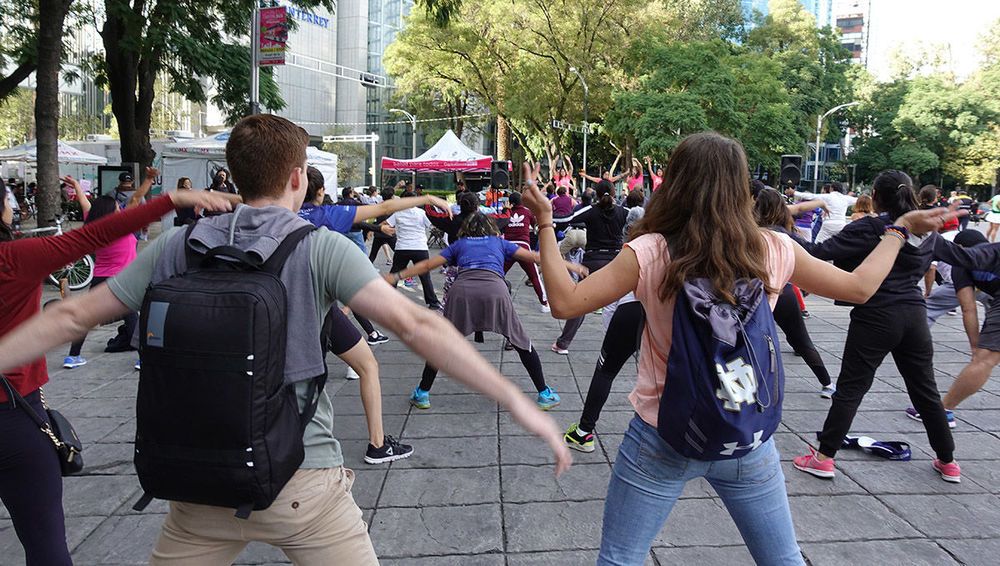 While exploring Reforma Avenue, students joined in on some Zumba on the street

Students visited Xochimilco, a borough centered on the formerly independent city of Xochimilco. It's characterized by a system of canals, which is typically full of small colorful boats. Once on board, students were treated to lunch and plenty of entertainment. Check out the experience below.

Students walked over to Bellas Artes to catch a performance of Ballet Folklorico. 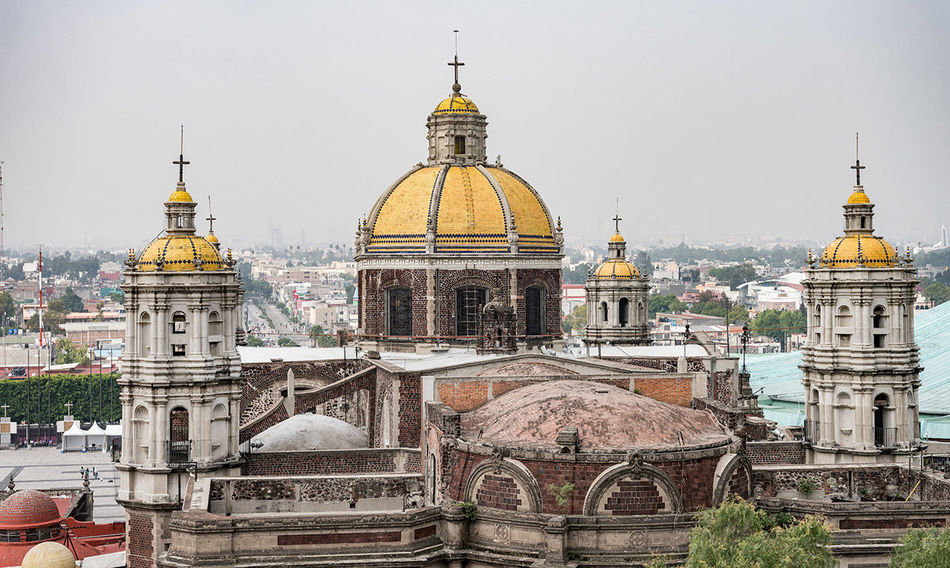 During fall break of 2018, more than twenty students will get to experience life, spirit, culture, and food in Mexico City as part of Campus Ministry's annual pilgrimage. Students will celebrate mass at the Basilica of Our Lady, visit the Pyramids of Teotihuacan, attend the world-famous Ballet Folklorico, and tour the National Museum of Anthropology, among many other activities.

In additional to visiting many historic sites in one of the largest cities in the world, they will gain a sense of Mexican Catholicism and spirituality. Students embark on the adventure on Saturday, October 13 and return Saturday, October 20. In order to participate, students were required to submit a letter of recommendation from a rector or faculty/staff member who would testify to their spiritual life.

Notre Dame International will be capturing the sights, sounds, and experiences of the students throughout the week-long pilgrimage.